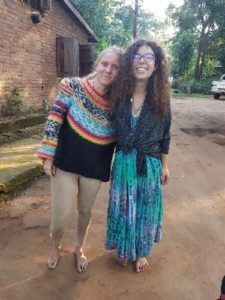 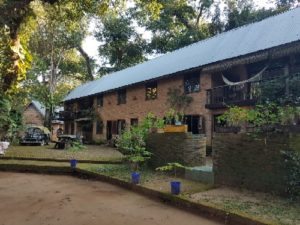 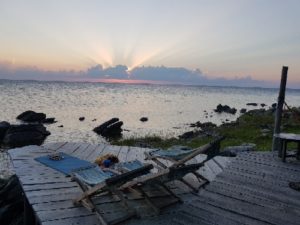 Didn’t have breakfast as we wanted to get up this 6 km mean hill so left really early at 06h16. The hill was a breeze and at the Total garage on top we ate our breakfast before heading to Kande Beach. Was so excited to find brown sliced fresh bread at the garage so made peanut butter and banana sarmies as well as our oats. Rode past a rubber plantation and a guy selling rubber balls. He tried so hard to sell us a ball but we don’t have space for anything other than food, let alone a ball. Children here greet us with ‘aloo’ (hello) or ‘hello, I’m fine’ or ‘give me my money’ and the ever popular ‘azungu’ (mzungu). We wave to the first two greetings but ignore the last one. Cassava is a plant grown in Malawi which is staple food that locals live on. We’ve seen cassava in various sizes on the side of the road, put out to dry. Cassava is the second most important staple crop after maize, and it is the main staple crop in the lake shore districts. It is becoming commercially important, and its production has nearly tripled in ten years. The scenery was very different to the past few days, being mostly forests and not as many banana plantations. Good tar, no pot holes and friendlier locals have found us warming to the people. We still miss not being able to buy cooked meals or tea like in previous countries.

The French couple, Jeremy and Claire we met at Hakuna Matata told Peter that they had been constantly hungry for the two weeks it took them to reach Hakuna Matata having ridden up the lake. Nkhata Bay had a big village so avos, carrots, potatoes, green peppers, apples, shelled peas were available but in small villages none of the above is seen … tomatoes and onions is about all that is available. Peter heard that there are seven Shoprite stores scattered around Malawi. Hopefully our routes will cross with most of these. Bought a bag of monkey nuts, two sachets of milk for our oats, some partially ripe naartjies and onions and tomatoes to go with spaghetti for supper. Also stopped to buy a coke when a bunch of drunk guys were shouting the odds at us, one coming over and wanted to shake my hand. I didn’t want to shake this dronkie’s hand so told him I don’t shake hands with people I don’t know … his reply ‘I know you, you’re from SA’. I got on my bike and left him standing there, swaying. Got chatting to (French) Tiwanee, the 25 year old young lady who runs the Kande Horse lodge who said they are located just off the tar road, but we had heard good reports from several people about Kande Beach Resort so we, mostly, pushed the 3 km to reach Kande Beach to find one lone tent pitched on sand … so pushed the 3 km back to the main road (rather today than tomorrow morning) and decided to go to ‘Kande Horse’ instead. 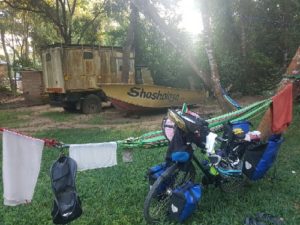 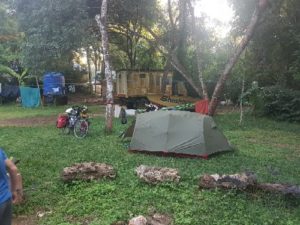 It was a good decision … hot shower in a lovely modern bathroom, grass in a tranquil setting. They have 14 horses and take visitors out riding then to the lake to swim while still riding the horses. Were going to stay a second night but our visa is only for one month so can’t loiter too much. We’re sitting in their comfy lounge and I’ve just heard Toto’s ‘Africa’ playing in the background. It’s one of my favourite songs which gave me a lump in my throat. Off to bed in our tent. Lala salama xx

– I wonder who Shosholoza belongs to

– Manageress, Tiwanee and Alex who is helping out at Kande Horse