Peter had the shivers last night, got up to go to the loo often and slept under four blankets. He had oats and coffee for breakfast and slept for most of the morning. At 01h30 this morning I heard a vehicle drive past and next thing I heard was a loud thud. Shortly thereafter I heard moaning which sounded like someone was either drunk or injured. I didn’t want to wake Peter and being in the heart of Africa I didn’t go out to see if I could assist. Feel terrible but Tiko lodge have security guards so they or someone living close by must have assisted. I saw this morning that the car had driven into a deep storm water ditch and on viewing the damage (it had been pulled out) the sump and radiator must be damaged as there was a lot of oil in the ditch and when a couple of guys pushed the vehicle turning it to face town, water was running out from the radiator and horrible noises coming from under the car. It also appears that the passenger must have hit the windscreen as it had multiple cracks. Hope they are ok.

I left Peter sleeping and went grocery shopping, the first time ever by myself and a bit nervous but all went well and I  returned with only a few Kwacha in his Standard Bank plastic bank bag (his wallet !!) but bought essentials for getting better … yoghurt, Niknaks, Simba chips, Eat Sum More biscuits, 1 whole kg of mince and boring stuff like eggs, onions, tomatoes etc and a lollipop for the patient. He slept again this afternoon between spells of being cold and shivering. We both felt better for having a ‘bucket’ wash … staff boil a kettle of water as well as heat a pot of water on the stove. We didn’t wash yesterday what with the walk to the hospital and then Peter was exhausted after the walk back. We’re having frikadelle aka meat balls with smoor tamaties en uie (fried chopped tomatoes and onions), rice and Fanta. The meat balls were good, though lacking a handful of parsley but he had no appetite and I didn’t want to be a dragon about eating all his food and have him cross with me. I did tell him that he needs to keep eating decent sized meals to keep his body strong so hopefully he’ll have more of an appetite tomorrow. Hope so as there’s international rugby on, which I know he would normally want to watch. He’s been in bed sleeping since 18h30 but he needs to take more tablets at 8 so I’ll have to wake him up. Didn’t take many pictures but at the pharmacy I noticed they never had a cash register … just put the money on the lower shelf ??.  Zoom in and look behind the pink and white jars … notes and change lying on the shelf.

I’m hoping Peter has a better night and day tomorrow. Your thoughts on his speedy recovery would be appreciated. I’ve never seen him this ill, he’s a model patient too and I am truly blessed to have him as my best friend and husband. Enough from me. Night all xx 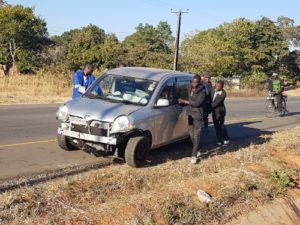 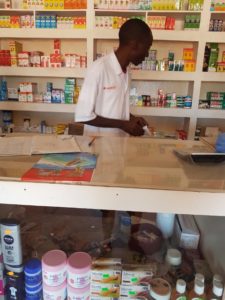