A dog was howling at 1 am this morning – a review on iOverlander mentioned this. Peter gave a loud whistle and the security guard pacified the dog. We got up when we heard the campsite’s feathered folk and their cockadoodledoo plus the lone turkey’s gobble gobble. He was a handsome chap, prancing around, displaying his fine feathers.

Eek, there are tiny ants in the tent. Fortunately not an army but Peter was concerned … many moons ago he and a mate, Glen Eacher, had gone cycle camping and had pitched his tent on top of an ant nest. The ants ate right through the base of the tent and in the early hours of the morning had to evacuate in a hurry. I’m sure Peter had visions of this happening again.

A treat for breakfast was a tub of flavoured pineapple yoghurt. We haven’t seen many minibus taxis but loads of light grey Toyota Corollas which are all overloaded, their boots so full with stuff tied down, almost spilling out, and the boot lid wide open. Chipata was a really nice town and we might have stayed an extra day if they didn’t have a water problem or the howling dog. We rode past a nice looking Protea Hotel but there were very few cars in front. Had barely started pedaling when I heard a siren come from really close by. The Army’s base was up a street I rode by so assumed the noise came from there. Peter was way ahead and I’d ridden a few hundred metres when I realised my bike was making this noise. My knight in shining armour turned around and after unloading panniers, upending the bike we found a small taped plastic thingie under the mudguard that had come loose and was scraping against the wheel, hard to explain.

I caught a glimpse of a store’s name … ‘Hard Work Pays’ General Dealer’ and this person had the right attitude. Then saw a billboard that I just had to take a picture of … ‘Eaten today’ ? See picture below. This made me think of what’s going in South Africa at the moment with farm attacks and the expropriation of land without compensation. At 10h30 we rode through the village, Mangqella where +- thirty 7 year olds were playing outside a school. They asked my name and I told them my name is Colleena. For about 100 metres thereafter I couldn’t stop grinning as all I heard was a chorus of Colleena. Lunch was a roadside affair of boiled egg and tomato sandwiches with passing children and cyclists staring. When hungry, must eat now!

We arrived in Katete rather bushed after riding 87 km into wind. Were expecting a tail wind but no such luck, however the smooth road made up for the wind. Bought veg for supper then checked out a room at the South Park Complex. For $20 the receptionist showed us a tired room, for camping we would pay the same price ?? We almost burst out laughing. We’re staying at the Tiko Community Lodge for $6 each and have a 4 bed dorm all to ourselves. Their library has two unusual additions for the night, ZaZa and Muffin, our trusty two wheelers. We briefly met Elke Kroeger-Radcliffe who is the director here. She gets overseas funding to keep this place going. Supper was spaghetti bolognese but the meat wasn’t minced, more sort of shredded. Almost forgot … other cyclists on our WhatsApp group told us wild camping is easy in Zambia … today I counted 5 dead Puffadders on the road, Mmm. Also saw a lovely Blue Crane in a small dam. Tomorrow is another long day with a ride of +- 90 km so I’ll end off here. Night all xx 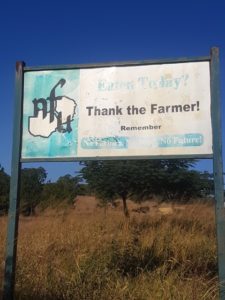 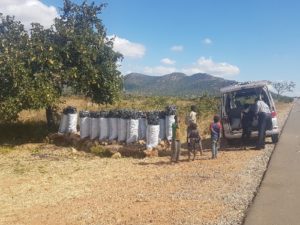 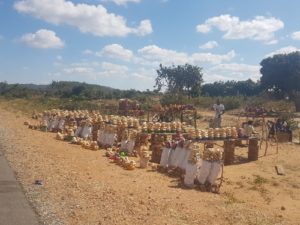 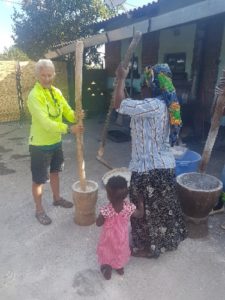 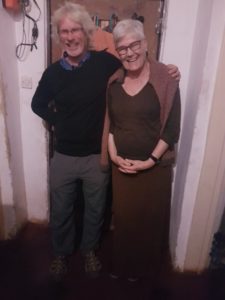 – This is where all the trees go in Africa, charcoal

– Nshima is the staple food in Zambia. It is a very thick porridge made from ground corn meal, is served in lumps and eaten with the hands

– Elke, 76 is the director here at Tiko Community Lodge