No coughing but a few sweats was how the patient reported on last night’s sleep. Fried eggs, tomato, banana on toast kept the hunger pangs at bay and we cycled into town to draw money, buy water and more glucose sweets from Pep and fresh rolls from the bakery, ZK6 for 10 rolls. On our return we sorted my back wheel’s loose rubber protector for a cable with super glue and duct tape. I felt guilty looking at my bike and how dirty it was so got stuck in and then Peter followed suit while being scrutinised by the little people, a bunch of about 6 year-olds. It’s not too bad once we start cleaning and then feel quite proud of the effort at reaching all the nooks and crannies. I must say that I do a better overall job than Peter when it comes to bike cleaning.

We feasted on chicken mayo and egg mayo rolls and a few, lotsa pips, oranges for dessert. While sitting outside on the veranda of our dorm bedroom trying to back up photos, a young female was carrying a squawking chicken by its wings. I blasted her from a dizzy height and told her to carry it, holding the chicken under its belly. She and another female thought this was funny so I blasted her again saying ‘would you like to be carried hanging by your arms’ … no she replied. Then I went off about how people in Africa mistreat animals. ‘Would you like a dog to throw stones at you’ ? No came the reply again … I totally give up.

Two days ago on our walk back from the bakery Peter took off at a brisk stride and got kids off cattle they were trying to ride, beating them with sticks to get them moving. They were doing it again today and I rode over shouting at them. The little devils got off and ran. Riding the cattle isn’t bad. What gets our hackles rising is they whip them with sticks. I’d like the bulls to throw the little buggers off. Peter’s gone to the hospital to look for benzine as a last resort as we only have one 500ml bottle left to use on the whisperlite burner and he says its 580 km to Lusaka. We have eaten really well here in Katete, having managed to buy a frozen chicken from Tiko Lodge and great beef mince from a proper butcher. We received a tip in Malawi on how to bypass using useless, ill fitting, converter plugs when charging, mainly cell phones, see below.

We have been quite comfortable at Tiko Community Lodge … staff are friendly and helpful, store stuff in their fridge, DSTV to watch soccer and use their stove, to save on benzine, as there’s none available to buy in Katete. On the minus side … terrible mobile data signal, having to walk about 50 metres to the loo, especially in the mornings ????. We also prefer our own food to what’s available on the menu … fried chicken, greasy chips not fried long enough and their spaghetti bolognese our first night here, not great. Worst is the fact that the rugby channel was blocked after half time at last Saturday’s match SA England ?? though Peter managed to watch the full NZ France game in the morning. Our mince stew is bubbling away on the charcoal fire outside in one of the kitchens pots, rice is on the stove in our fancy GSI non stick pot. Soccer on at the moment is Uruguay 1 Saudi Arabia 0 at full time. Daren’t go to our room now what with the distance from there to the loo. I think we’ve been eating food that’s too wholesome as it’s the second night in a row that I need to trot rather quickly to the privy a few X in a row. On that note, I’ll end off here. Lala salama xx

PS.  Today one year ago Peter and I were in Dornbirn, Austria, visiting Walter and Marion. If you are interested in reading my blog Amsterdam to Istanbul, it’s on 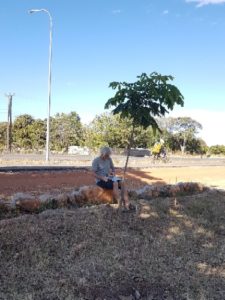 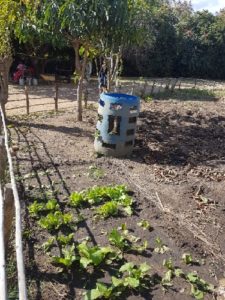 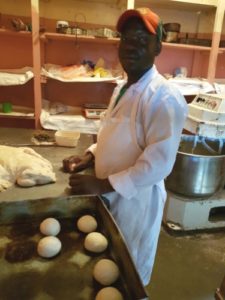 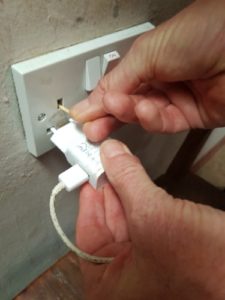 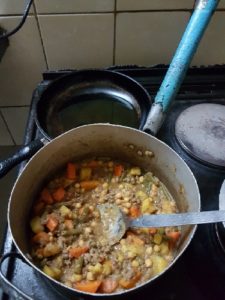 – A portion of the vegetable garden at Tiko Community Lodge

– The baker the the bakery shop

– A short cut when charging stuff that needs an English plug