05h00 and Peter’s just returned from the loo and its freezing outside. We hope to reach Lusaka this afternoon in time for rugby !! Said good bye to Phillip and Emma Tembo who live in the Shishengula area. With only a thin windbreaker on I was freezing but knew it warm up fairly quickly, Peter wore both his jackets. I said goodbye to all the hoenders (chickens) and OO’d and AA’d at the chicks, now four days old, and mother hen. When she saw me she started gathering her babies and hid them under her wings and body, very protective she was.

Left at 07h10 and I put small thin plastic bags over my short fingered cycling gloves to try and defrost my finger tips. By 08h30 I eventually warmed up going up a hill and with the sun on my back. Bumpy gravel but for the entire ride we had a good breeze mostly from behind. The hills were easy but there was much more traffic with little to no shoulder to ride on. A huge T sign indicating a toll road at 33 km got us excited that the road may improve but no such luck, same same bumpy and rough tar.

We followed two local cyclists, Patrick and Gift, and took a gravel detour around the toll plaza. On the outskirts of Lusaka every second business we saw were companies advertising drilling and boreholes or cement building blocks and paving. I realised we were nearing the city when we saw plenty of security guards and electric fences. It was nice to see a few road stalls selling seedlings compared with the usual tomatoes and onions,  and was excited to see a shopping centre with Pick ‘n Pay and a Food Lovers Market. Many petrol stations had convenience stores. We also stopped to take a photo of the house Oliver Tambo must have lived in while in exile. Great seeing more SA naval oranges and pink lady apples so loaded our panniers with a supply. Back on smooth tar again and double carriage was a bonus.

While riding over a bridge in bumper to bumper two laned traffic, we squeezed our bikes between the two lanes and while all vehicles sat gridlocked we pedaled and reached the traffic lights in no time, we just love riding in heavy, slow moving, traffic. On seeing a Builders Warehouse store Peter went in and as they had benzine in stock he bought 3 x 750 ml bottles. We need to look for plumbing tape as this may help if wrapped around the pocket rocket burner screw that’s stripped. Other SA stores seen were Ackermans, Markham, Total Sports, Exact, Woolworths, Nando’s, Shoprite, Spar, Truworths, Pizza Hut and Debonairs.

The blue light brigade were similar to those in SA, a bunch of AHs. We arrived at the Cosmopolitan Mall and while I shopped for a few basics, Peter kept watch over our bikes … didn’t want anyone stealing our oranges and apples !!  I saw a lady and her daughter a number of times while in Shoprite and asked her a few times where to find certain products, she was also at the till next to mine and got chatting about our ride. When I joined Peter outside they walked past so I introduced Peter to Natasha Zebron and her daughter. I asked her if she knew of a dentist other than the one at the complex so she rummaged in her bag and produced a business card, she’s a dentist but 20 km from where we’d be staying, a bit too far but she drew a map of where we’d find the Adventist Eye and Dentil Clinic, nearer to where we’re staying. Peter chatted to Chongo from Pizza Hut and was about to buy pizzas but I’d already bought eggs for supper (scrambled). Peter’s half watching the Stormers Jaguars rugby as well as the Uruguay Portugal soccer match with Tsotsie, the cat going from his lap to mine for love and cuddles … reminds us of our girls, Coco and Soph giving cuddles and kisses to friends, Renton and Irene who are their foster parents for a few more months, thanks guys. Night folks xx 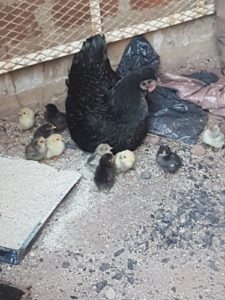 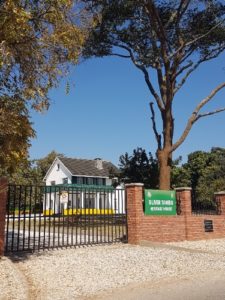 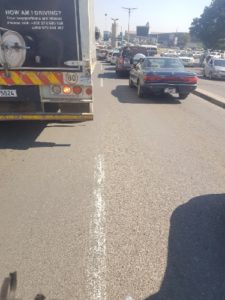 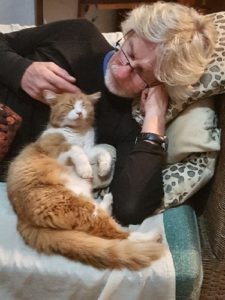 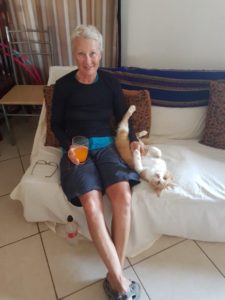 – Mrs hoender and her 4 day old cute chicks
– Oliver Tambo’s house in Lusaka
– We rode about 500 metres between these two lanes of stuck traffic, magic
– Tsotsie the super friendly cat at Bets and Wikus’ home in Lusaka