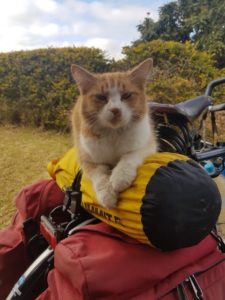 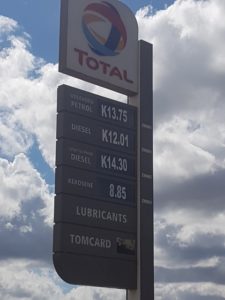 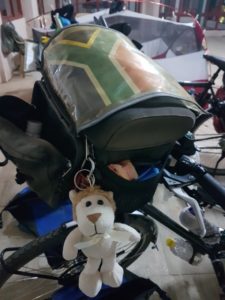 Tsotsie went out for quite a while this morning and on her return all four paws were covered in mud so she spent ages washing herself. I think she knew we were leaving as she was very ratty and feisty. When I picked her up she complained and gently bit my eyebrow or she may not like being picked up. She normally came to us for TLC. Matthew and Judith, Ros’ help around home, weren’t in so we left keys and remote with Ian and Nan, Ros’ neighbours. They are ex Zim and sadly lost their farm in the Mugabe era. After many hugs and last minute kisses we finally left at 09h30, and very heartsore. It’s a 6 km ride from Bets’ house to the Cosmopolitan Mall. I bought a kiddies second hand lion soft toy for K5 as a mascot on Muffin (my bike) and I’ll name her Tsotsie or Fluff Puff. Peter topped up my phone with an extra 3.5 gig for K75, bought bread and drew money and hit the road at 10h45. At 28 km we rode through the Shimabala toll plaza and it was an easy ride on smooth tar with one or two minor hills and a stiff breeze from the east up until 45 km. Then the road made a few left turns and the rest of the ride was into the wind. Arrived in Kafue town (it has a PnP here) and didn’t fancy any of the three guest houses as they were either over the top pricey or dumps. Price of fuel at the Total garage … Petrol K13.75, Diesel 12.01, Diesel low sulphur 14.30 and Kerosene 8.85. 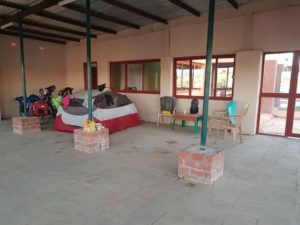 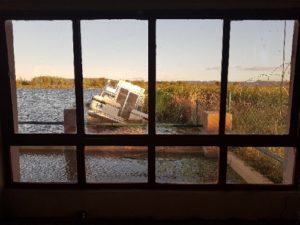 We carried on until we reached Chita Lodge. An elderly gentleman had told Peter earlier about this place but he said it was called River Motel (or something similar), and cheap. On arriving at the place we discovered it had changed ownership, had a major upgrade, swimming pool etc and rates started from K800, camping K150 pp ??. We decided to use their round thatch lapa (with table and chairs) and ate our lunch in comfort before venturing forth into ‘who knows where we’ll sleep tonight’. Around 14h30 we were about to cross the Kafue River bridge and on the RHS was a complex that looked ok. I went and negotiated and for K50 we have the conference room to ourselves. There are clean loos and a basin with trickling cold water. I’ve washed the areas that matter but we didnt sweat much today anyway. It’ll be noisy till 22h00 but the windows tone down the music a bit and we’re used to the noise from trucks. Peter’s having a nap while I get this done. There are quite a few nice speed boats and jet skies at the dock. A young couple sitting outside our conference room accommodation had bream for lunch, K60 and looked appetising. We remember having bream when we were on a houseboat in Kariba in 2012 and it’s a tasty fish. 17h30 and the sun has just set with a bite in the air.

The birds coming to roost in a huge tree at the party place are making a hell of a racket in an attempt to compete with the doef doef music. Music? … nah it’s just noise, but the birds are not winning today. The MSR Whisperlite burner is definitely up the pole as its got no oomph and takes ages to heat up water for the pasta. On my solo ride to the mall last week I stopped at a hardware store and bought plumbing tape to wind around the gas canister’s screw that’s stripped, hoping the Pocket Rocket would work as a back up. Peter tried it out and it worked but we’d probably have to replace the tape each time we use it. The Italian spaghetti, made by Divella, that we’ve been buying from roadside shops is thin and not stodgy like the Monis brand that’s sold in SA. Our supper is done and dusted and we’re now in a quandary on whether to ride through Zimbabwe or take the turn off 2 km from where we’re camping tonight and head towards Livingstone and from there into Botswana ????. We have friends in Chinhoyi and Harare who are bending over backwards trying to convince us to ride in Zim. We might have to toss a coin to decide ????. Got to get dishes washed and then debate yes or no. Ciao for today ? ????

– Tsotsie, the gorgeous girl we’ve had the pleasure of spending 8 days with in Lusaka. We’ll miss her purrs, cuddles, fluffy tail and dirty toes ????

– Tsotsie, my mascot for the rest of our ride through Africa

– Fuel price at a Total garage just south of Lusaka

– This skipper may have had ‘one too many’