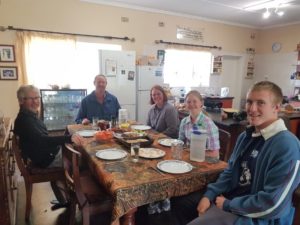 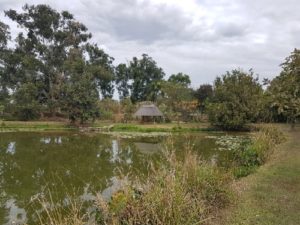 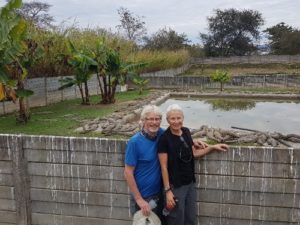 Peter was out for the count last night, snoring his head off while I read trying to induce sleep, eventually dropping off into dreamland well after midnight. I fell out the bed this morning and bumped my head on a chair as the mattress had shifted a bit ?? and I’d only had a half a glass of wine last night. Nick, Lindale, Peter and I walked the perimeter of the college this morning with Jack Russels Teddy and Tinkerbell. Lindale was telling me yesterday that she saw a +- 4 metre python a while ago lying just off the path she was walking on. She normally listens to music but was warned about the python so now rather listens to  sounds of the birds and bush. We met the Principal of the junior school Dean Seeliger who grew up in Hout Bay, went to Wynberg Boys High, studied at Stellenbosch, taught at Lomagundi College in the 1990s, been in the UK for many years and appointed junior school Principal a few months ago here at Lomagundi College. 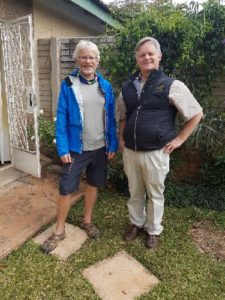 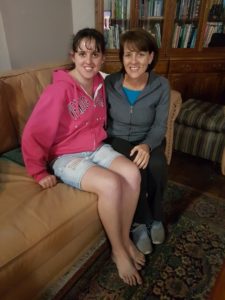 Dean would like us to do a presentation to the pupils on Monday on our ride to date. Was initially nervous about this but we’ll wing it and take our loaded bikes for the children to see. Not sure how many children will pitch as most youngsters are more into shopping, pizza, phones etc. The Lomagundi College was built 35 years ago by farmers in the district due to a drop in the general standard of education in Zimbabwe. I also learnt yesterday that Betsy and Wikus Viljoen’s two children were scholars at Lomagundi College and that Lindale’s Dad, a minister, often gave sermons at the church near their farm in Doma. Lindale prepared a huge breakfast  with pawpaw, avocado, mushrooms and onions, bacon, tomato, sour dough flap jacks and fried eggs, really yummy.  After helping with the dishes, I’m way to full to do anything other than relax on our beds and snooze. I scoured my heels all nice and smooth so they won’t be all scratchy in bed at night. Lindale made a delicious chocolate cake to take along when we visit her friend, Lisette and daughter, Thea who live in Mazwikadei. 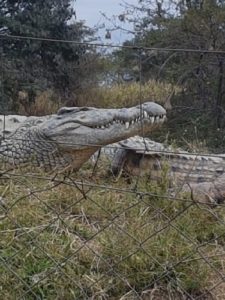 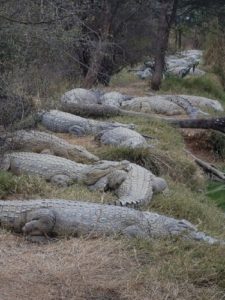 They farm crocodiles … hundreds of them. I feel bad that I’ve always said they are only good for bags, belts and shoes and seeing them in captivity actually makes me feel sorry for them … but they’re still ugly and mean looking. Their property is gorgeous and after walking around viewing these vicious beasts we had scones, jam and cream AND Lindale’s choc cake ????. The drive home was slow, getting caught behind slow drivers. Trent whipped Serene and Peter at cards and we’re now tucked up in bed ready to catch a few hours of Zzzzz. Lala salama everyone xx