It was freezing this morning and the wind made it even colder. It would have been nice to lie in with a cup of hot chocolate, Spot the cat and our kindles but there will be time for that once we reach home in a few months time. We sat at the water’s edge eating our raw oats and milk listening to a few fish eagles calling and watching Spot chasing goggas (bugs) in the long grass, then waited for Diana and Roy in the lounge, Peter paging through Gregg Robinson’s book on Mana Pools. Both of us had second breakfasts, Peter had porridge AND toast, I had granola.

We said good bye to our hosts but had to pop in to see Kevin and Elaine at No 52 to collect some potassium permanganate crystals for diarrhea! They were telling us last night how these crystals kill the ‘runny tummy bacteria’ in one’s system. The crystals can also be used to wash veggies and they have given the ‘PP’ crystals to their dogs, chickens, sheep, kids … this remedy dates back to Kevin’s grandma who believed giving the crystals to anything that breathes and called it ‘Granny clamp it’ muti ??.

After 4 km of gravel and 15 km on strip tar we reached the main road and the town of Banket where we bought a basic round type of cake with a bit of icing on top for 50 cents and two cokes, also bought an avocado pear and some tomatoes. We finally reached the top of the ‘Great Dyke Pass’ around 2 pm and stopped for squashed rolls topped with avo. It was so cold that we had both windbreakers on, I wore both my buffs and both Peter and I wore socks with our Keen sandals … I even kept my helmet on.

A fancy black Merc pulled into the lay-by parking area and a cowboy emerge from the drivers side. I was too slow with my camera but he was wearing a Stetson hat, a jacket adorned with fringes and cowboy boots … what a spectacle. Once we freewheeled down the Dyke Pass the going was more flat but many trucks still passed us as well as impatient people in regular cars. On a few occasions a truck would overtake us with another vehicle overtaking the truck, scary stuff. When Peter gave a loud whistle, I knew I had to get off the tar, dropping a good 10 – 20 cm onto the gravel shoulder.

We reached the Tollgate and knew that the butcher that Roy told us to look out for was nearby. I would describe the butcher as one for locals as none of the meat appealed to me. We were hoping to buy some goulash to add to our supper but I don’t think goulash has ever graced the display counter at this butcher. The owner, Joseph Chirau, acquired the butcher and the farm behind in 2003, around the time of the notorious farm invasions where white farmers were forced off their land, Mmmm, Peter is going to look into this to satisfy our curiosity. That aside, he kindly ask if we’d like some cooked rice and potatoes and Nyarai, who works in the butcher gave us some. Peter added this to our sautéed onion and tomatoes … delicious. Wiped the sweaty parts of bodies, teeth brushed and we’re holed up in our tent in our sleeping bags and it’s very cold. Hoping to get away by 08h00 tomorrow wearing the same clothing with possibly a second pair of socks. Oh for a cup of Milo or hot chocolate. That’s it for today folks, good night xx

PS.  OMW, I just heard two long toots and putting 2+2 together realised the train line we saw earlier  IS  in operation!! 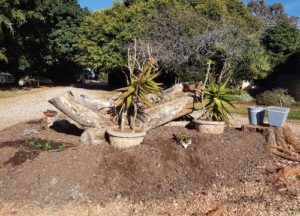 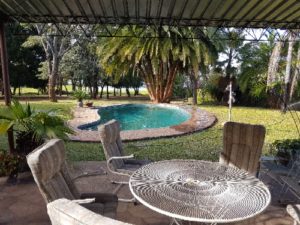 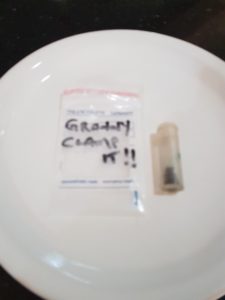 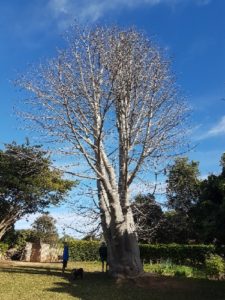 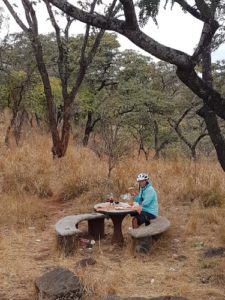 – Spot dug herself a hole, made herself comfortable then slid down the small slope. It would have made a a great video