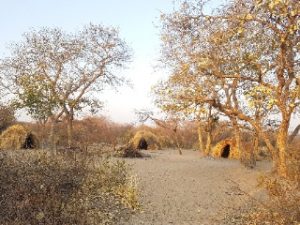 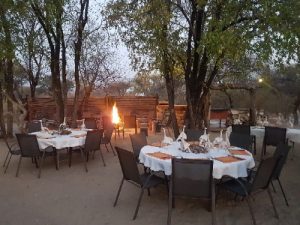 The two Dutch, two French, one Kiwi and one Bokkie all had breakfast together then we said bye to Eef and Monica who were heading towards the Caprivi and Vic Falls. Peter and I went to meet Ghari-ma (27), the ‘ma’ means young. Shanti (23), was our translator once again for a tour of the bush and all it’s cultural wonders … as seen through a  Bushmans eyes …

– Kalahari raisin bush is used for fertility
– Buffalo thorn berry juice is used to prevent falling pregnant
– Wild monkey orange. This is what we saw being sold on the road, the outer skin as hard as nails. Ghari-ma used a stick to crack open the fruit. Sweet sour pips covered in flesh that Kudus, monkeys and porcupines also love to eat.
– Some women in this clan are bare breasted, those that cover one breast and tummy with an animal skin are women who are pregnant
– Ghari-ma was demonstrating why bushmen don’t get circumcised at puberty … rubbing against a rough animal skin loin cloth creates soreness … lots of laughter.
– Old bushmen don’t know their age in years but only the season they were born in. Spring is equal to a new year.
– The San Comiforia bush … when the bush is in flower, insects eat the leaves and deposit larva onto the branches. This larva is harvested and bushmen make poison to use on arrow tips to dart large animals when out hunting e.g. Giraffe, Oryx, Eland. The animal takes about three days to die and the poison circulates throughout the animal’s blood but once the blood cools down the poison then goes back to where the dart entered and only this area is cut away and burnt.
– They make a love bow out of Oryx horn and this is used when choosing a partner
– They showed us how a bird or Guineafowl trap is made to catch birds.
– ‘Easy break trees’ (don’t know its real name) have hollows in the trunk and where water is collected – a reed can be used to suck out the water when it is scarce and depositing it into ostrich shells
– Were shown a bush that can treat eye infection, another for treating heart problems and yet another how to treat a broken arm
– The root of a Lavunda is boiled and used for treating colds
– Large fruit tree seeds are used for necklaces, handbags or tree root is boiled and used for diarrhea
– Kammankorro Wild brandy bush branches used for making bows
– False Umbrella Acacia tree is used for making a quiver container. The quiver bag is made from Steenbok skin and the Bushmen hunters have it for life
– Violet tree root, mashed and mixed with fat to make a paste is rubbed into sore muscles.  The small piece that was cut mells like Deep Heat
– Bushmen are great actors explaining something, gesturing with actions, hand movements and facial expressions
– To Make a fire one would take two sticks, one male the other female from the Mangetti (soft wood) tree. A small amount of soft dry grass is placed under a knife blade. Ghari-ma then cuts a small groove in the end of the female stick and placed it over the kindling and blade. The other stick’s end is placed in this groove and he then rubs the stick using two hands. The friction  heats and gets the kindling smoking. He removed the kindling and folded it in half and blew onto the smoking area which started the fire. 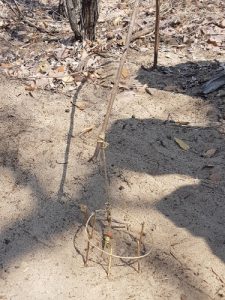 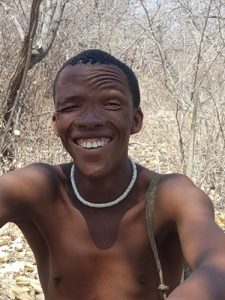 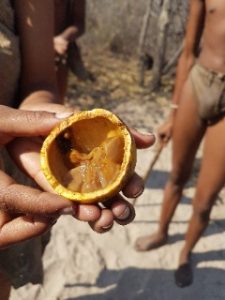 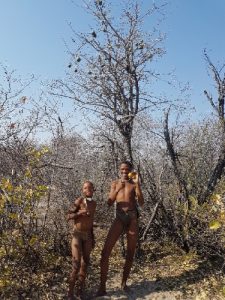 Now we know how to start a fire when we’ve forgotten the matches at home. The whole tour lasted close to four hours and both Peter and I can highly recommend doing both yesterday’s demonstration on bow and jewellery making and today’s tour of the veld. I hope you have found the above of interest.

We lunched on couscous with tuna mayonnaise with Charlotte and Augustin. It was too stinking hot for Peter in our tent so he’s sitting at the under cover dining table which seems to have a breeze passing through. I’ve just had a dip in the portable swimming pool, the water as cold as at Clifton (a beach in Cape Town) on the Atlantic sea. The Bush Camp have a huge group of Germans that arrived a short while ago so it will be busy tonight. Jörn arrived to see to a few things here and we arranged with him to collect us at 08h00 to take us back to the Lodge to get our lazy bones back on the bikes again. Supper was Eland schnitzel and Milo dessert. Night all.

– A replica of a Bushman village
– The monkey orange … and the tree
– Trap for catching birds or guinea fowl
– Ghari-ma, our guide
– Dinner table set under the stars