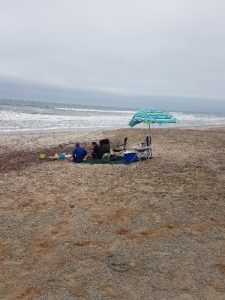 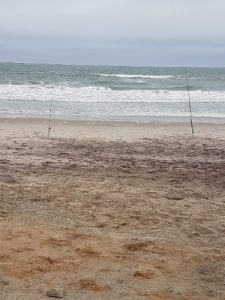 We left our warm and snug tent and braced ourselves for the cold. I had put on two Icebreaker T shirts plus a long sleeved one, two windbreakers, two buffs, long pants, socks and Keen sandals !! Hands are cold. Made our way over to Pirate’s Cove Pub to watch the Bokke klap the Kiwis 36-34. Our original plan was to ride Africa from North to South (Cairo to Cape Town), but just to add a bit of spice we decided to throw in East (Dar es Salaam, Tanzania) to West (Henties Bay, Namibia). Left the pub to buy Peter a humongous mince vetkoek from Spar, I had a sausage roll from yesterday’s little restaurant, Nam Pies. We heard from Scott and Sarah who stayed with us in 2016 (Paris to CT) that they’d also camped at Buck’s in Henties, one row away from where we are. They’ve given us a good few tips on where to stay as we’re following a similar route to their ride ????. 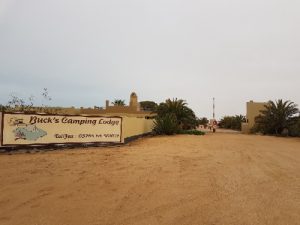 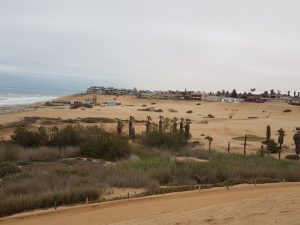 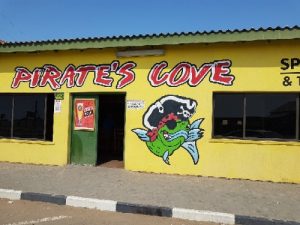 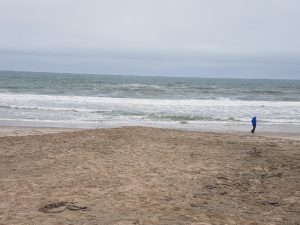 Watched some of the Oz Argentina game but a group of ladies out on the (afternoon) town were so rowdy that we decided to collect our sunhats and head down to the beach. The sun peeped out of the fading mist and we walked past the golf course, that is currently being developed, right down to the waters edge and dangled our fingers into water that was warmer than the air. Two lone fishermen sitting on a tarpaulin in short pants and wearing thin long sleeved tops, their rods cast out to sea. The climate is harsh and we can only assume people live here because the fishing is so good. Bought fruit from Spar and wanted to buy another bottle of wine for tomorrow but the bottle store and small shops close at 1 pm on Saturdays and are closed altogether on Sundays, other than Spar. Every second 4×4 in Henties Bay have a few fishing rods in holders on their front bumpers sticking up like pairs of Oryx horns.

Holed up in our tent and watched the movie Tomb Raider, the 2018 version. Getting our bags packed, a nice hot shower then supper before hitting the hay. Fingers too cold to type. No waffling today, short and sweet … sweet was the Bokke beating the Kiwis today ????

– This is where we watched the Springboks beat the All Blacks

– Henties Bay, a seaside town is where serious fishermen come to fish

– Peter dipped a few fingers in the icy Atlantic Ocean