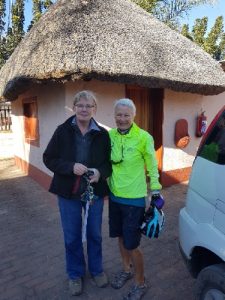 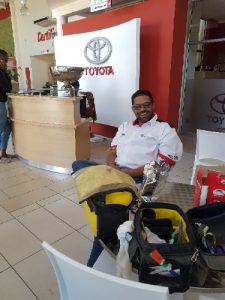 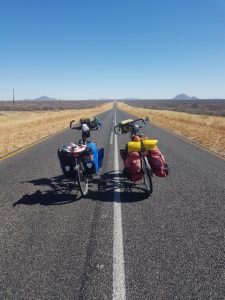 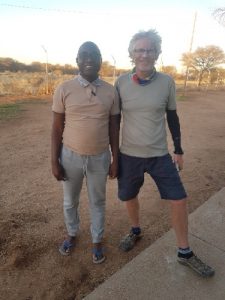 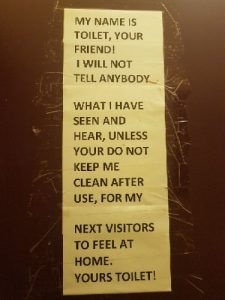 Woke up at 04h30 with Brenda having a shower … leaves home to be at the Lodge or the restaurant by 05h00, six days a week. She tries to take Sundays off but invariably goes to work most Sundays and is a kind, gentle and generous lady that her boss and others at work take advantage of. I didn’t think I would bond with a Staffie as many years ago one of my cats was attacked by one but this boy is a lovable chap and adores a chin and chest scratch. We packed up, had some breakfast, bid teary farewells first to Jock and then Brenda at the lodge. Stopped at the Spar to buy some rusks but they didn’t have the Honey and Almond type so got Honey and Fig, a good substitute. Popped into the Wimpy restaurant and they have a TV so may watch the SA Oz game there, if the restaurant isn’t full. The wind was head on when we left Brenda’s flat but Peter said that with the direction we were going, it would change to come from the side. At Toyota watching rugby but Gawan, who we spoke to yesterday, is at his desk working. Got chatting to Andre who sold his Landcruiser through Toyota and is now buying another to do a specific building job. He also has horses that he races with … does desert endurance races of distances from 120 km to a four day race totalling 480 km. They do loops of 30 km at speed and the horses get checked by a vet after each loop and rest for almost an hour before doing another loop. They are Arabian from the Schneider Waterberg stock and are really tough, originally used to herd cattle. Final score NZ 46 Argentina 24. 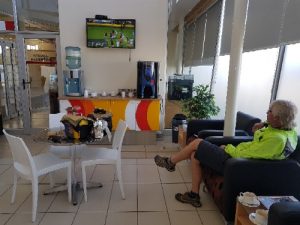 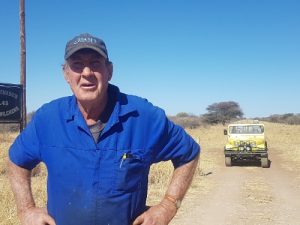 Time to hit the road. Wimpy was empty so popped in but Oz scored and converted which is a sign to rather get pedalling. A day of few hills, flat roads, breezes from all directions at various times and meeting Udo Wilckens who has farmed cattle for 40 years on the family farm, his father came from Germany in the 1920s. He has a yellow 1974 Willy’s Jeep, not all parts original, but it looked great. Arrived in the town of Kalkfeld and checked out the garage but it doesn’t have electricity and is currently closed. Made our way to the clinic and got permission from Joseph to pitch our tent. Joseph is a male nurse at the clinic who went out of his way to ensure we’d be comfortable. Even the local dog, Bully follows him home at night knowing he’d be allowed inside. We have the use of the staff kitchen, kettle, loo, basin and plugs to charge stuff. Will wash the essentials in a litre sized yoghurt container with some boiled water and retire to our tent to watch an episode of ‘Bones’ and then nod off and dream of tail winds, a comfy saddle and a banana milkshake or a Fanta float ???? xx

– Rugby, rusks and filter coffee at the Toyota dealership in Otjiwarongo

– Udo Wilckens with his ’74 Willy’s Jeep

– Joseph from the clinic

– Thought this was priceless … zoom in and read. Wish it was on many other loo doors we’ve had to use