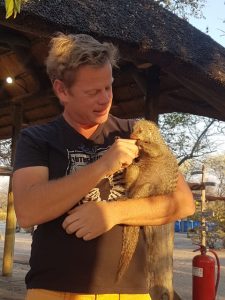 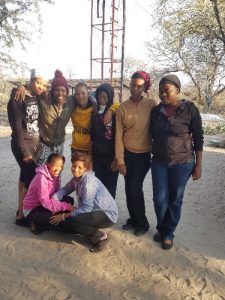 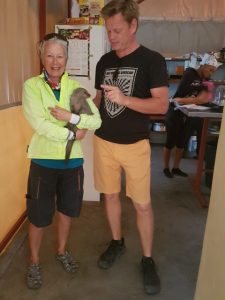 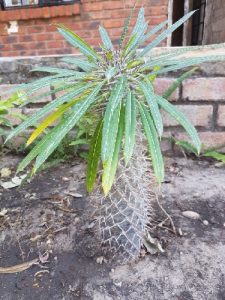 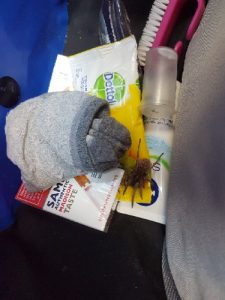 We left Fiume bush camp with a heavy heart but feeling well rested. The Gressman’s also make charcoal and have a total staff complement of 70 between the Lodge, Bush camp and making charcoal. Todays ride was only 35 km with the breeze coming from the west. This will be great for the section between Swakopmund and Windhoek but from here onwards we go south, south west ????. Jörn kindly took us to the Lodge and we faffed around for an hour eventually only leaving 0at 10h35 but first had to remove an unwanted guest from my pannier that I’d used to take clothing and toiletry items to the Bush camp. So this Rain Spider travelled the 70 km to the Lodge and has a new place to live and Crash, the mongoose, won’t have him as a snack. I only noticed him sitting snug as a bug at the bottom of my pannier when I packed my two clothing bags. The 4 km to the tarred road was a lot easier than when we’d arrived last Thursday but we were happy to arrive at the turnoff to Maori campsite at lunchtime. 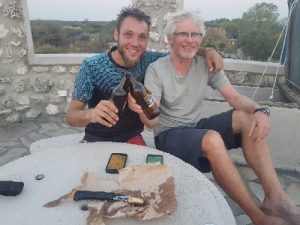 Camping here is N$100 pppn and we can drink the tap water which also isn’t brakkish. Nicolas arrived around 5 pm after riding about 125 km and also said he was riding into the wind. We’re hoping our vacuum packed mince is edible having been initially frozen and then transported on two occasions by bike in a warm pannier ??but now it’s time for showering … which was magic … clean, spacious with a shower nozzle that doesn’t spew water all over. Peter, the owner unlocked the tower and we’ve just had sundowners on the roof, another magic sunset. The mince was still good and we added two small tins of chakalaka and a tin of baked beans to bulk up the food. Rice instead of spaghetti a nice change. Peter and Nicolas are pouring over a map of places he would like to see. I’m off to bed after emailing this. Night all xx

– Jörn is a dad to Crash. When other mongeese come to the Bush camp, Crash goes and hides

– Staff at the Bush camp

– The ‘Half Mens’ plant in Afrikaans aka the ‘Half Person’ plant