Peter’s night … hot one minute, cold the next and up to pee a couple of times during the night then woke up with … I’m hungry. This was definitely a good sign that he’s on the mend. We discovered that the hospital pharmacy gave him too few tablets. I rode to the hospital just after 06h00 and what we did wrong was to continue taking 4 tablets every 8 hours … instead of, on day 2, taking 4 tabs every 12 hours ?? so he overdosed and tonight he’ll take the last 4 tablets. Treatment is normally a 3 day course of tablets,  Peter took most of the tablets in 2 days and they won’t give him more meds. Zander, a friend we met up with was so ill, he said moving his arms or legs was excruciatingly painful. Peter’s only had headaches, shivering and sweating profusely … and I forgot, no appetite. So waking up hungry is a sign that he’s well on the mend.

Returning from the hospital I then rode in the opposite direction to go to town and buy more yogurt for the patient, 5 litres of water (he doesn’t like the borehole water here) curry powder for our mince and veg stew tonight. He was able to watch the entire NZ France game of rugby, returned to our room and Zzzzing again. I’m enjoying catching up on doing nothing.

Changing the subject, we chatted to a local in Malawi a few weeks ago who told us that most aid money is directed to agriculture. Turns out the minister of this portfolio’s home was searched and a vast amount of foreign currency was found in the roof. Then spoke to someone in Zambia who knows that the current president isn’t as squeaky clean as we thought … he was an attorney, found to be corrupt, subsequently disbarred and is now president of the country !! There is so much corruption in Africa … the people remain poor, so many are uneducated and are no better off even with all the foreign donations being pumped into countries but not reaching those who need it most.

We cooked a magic mince curry for supper with carrots, potatoes, lovely young green beans and had this with fresh round rolls from a real bakery ???? As I walked to the main building this afternoon, where we’re staying,  I couldn’t believe my eyes seeing a South African guy getting out of his Nissan Hardbody CFM bakkie and I got all emotional when I introduced myself to him. Grant Lyons lives in Paarl and is on business in a few African countries buying crops. A lovely gentleman who had a tomato sandwich for supper so we asked him to join us with our curry and rolls after watching the first half of the SA England rugby match. Dstv went on the blink for the rugby channel so didn’t see the second half but World Cup soccer was being transmitted. He leaves early tomorrow morning with an 11 hour ride to ‘can’t remember where’, about 400 km south of Lusaka. Peter said he’s feeling a lot better but not 100%. He may do a short ride on Monday to see what his strength and energy levels are like but we’ll probably be here till about Wednesday next week. Thanks to everyone who sent Peter speedy recovery wishes. He can’t thank you personally ‘cos he’s been sleeping since about 9 pm. Night all xx 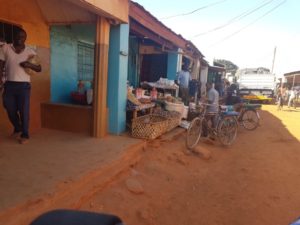 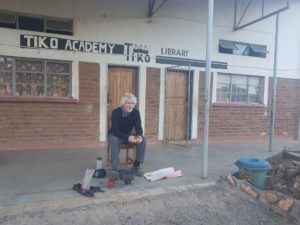 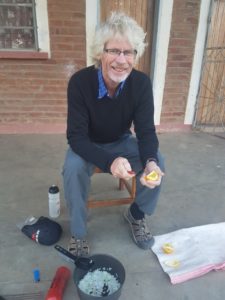 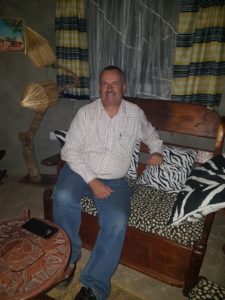 – Peter keeping an eye on the onions while eating a sour-ish orange. Note the trimmed beard