Bacon and eggs for breakfast, a group photo of the Janse van Rensburg and Broomberg families and bikes secured in Craig’s bakkie for the 12 km ride to the main road on soft sand. Janita and Fanie are not the run of the mill parents. Zimba, one of Nicky and Craig’s cats decided she also wanted to camp and I got a lovely picture of her inside the tent this morning while the happy campers raided the kitchen for breakfast. Fanie and Janita discipline their brood, the children are well mannered and polite and it was a pleasure to be in their company. Little Reinhardt was the cutest of the lot. Janita mentioned that she’s not ‘a helicopter mum’ … these are mothers who hover over and around their children. She studied Nuclear Physics at university, got bored so changed to teaching…. maths and science. Fanie is a farmer but was also a teacher, though not fully qualified. We watched in amazement when Reinhardt, 6 made his scrambled eggs and 4 year old, Jana did her corn flakes and milk this morning. In fact all four kids are able to make their breakfast and make mom a cup of coffee in the mornings as well.

After leaving the Janse van Rensburg’s farm, ‘Geluk’ (lucky) we had barely travelled a few km’s when Peter remembered that his cell phone was still charging at the farm… glad it wasn’t my phone. We finally got riding at 09h08 and it was a long day in the saddle. A good tarred shoulder all the way, reasonably flat, no radical winds and no election drama along the way like yesterday in Harare. In fact there wasn’t much traffic at all. Peter just told me that 6 people were killed and 14 injured in the Harare election protest and looting, so unnecessary. I wasn’t going to mention anything about the tragedy in Tajikistan where 4 touring cyclists were killed, 3 were injured. Evidently ISIS claimed responsibility for the attack. Our friends Tane and Anneke cycled with them for a few days before the attack took place and they were devastated on hearing the news. I have not read or followed all the reports other than what we received from members on our WhatsApp group, The Cairo-CT Group. All touring cyclists we have met to date are lovely people, from all walks of life and this is just so sad.

We found a place to pitch our tent … at the Mbembasi Police Station which is about 45 km from Bulawayo, a nice short ride tomorrow. A few ‘dronkies’ (inebriated locals) came over hoping for a donation, probably to fund their next drink. They struck out. We made supper using their round cement picnic table and benches. The canteen, I’d rather call it a pub, sells beer so Peter had two Castle Lite beers (the best available in Zim), I’m a Fanta girl. The music at the canteen started at 18h00 and we were told it stops at 9 or 10 pm … can live with this, but I’ve just checked the time and at 21h08 all is quiet, other than the trucks and traffic noise which we’ve got used to. All tucked up snug in our Mutha Hubba tent and I’m ending off here … my kindle and a block of Beacon Milky Bar chocolate is calling! Lala salama folks xx 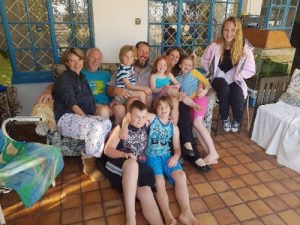 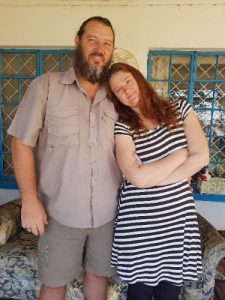 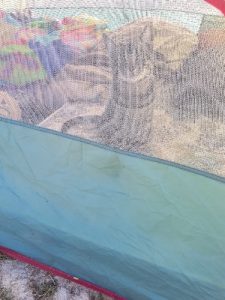 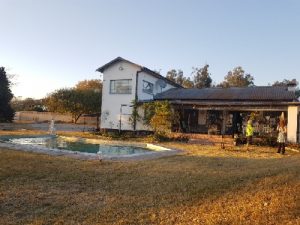 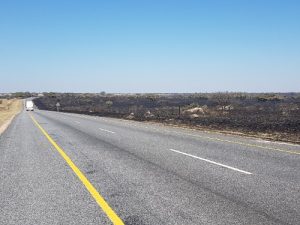 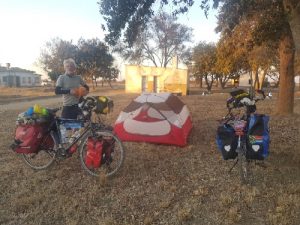 – Locals have started ‘burning’ dry grass. They do this every year which ruins the beautiful Zim scenery

– Our room for tonight at the Police Station